Donald Trump’s “horse whisperer,” Steve Bannon, has traveled the speaking circuit throughout Europe, pushing for an alliance of far-right wing parties he calls “The Movement.” The idea for a “Fascist International” is nothing new. Central Intelligence Agency archives contain multiple references to a resurgent Nazi dream, cultivated in the rubble of World War II, to create a “European Reich” stretching from “Dublin to Vladivostok.” This Fourth Reich, unlike the Third Reich, was to be a corporate-controlled supranational entity. 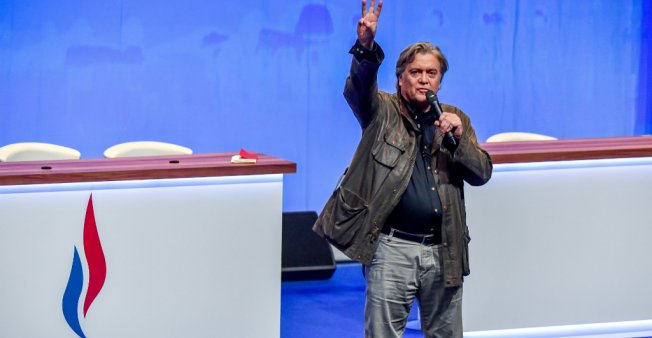 The Third Reich would have never risen had it not been for the cult of personality wrapped around Germany Fuhrer Adolf Hitler. Thanks to Bannon’s relationship with Trump, the framing of Trump’s cult of personality as a unifying factor is how the former Trump campaign manager and White House strategist is attracting European far-right leaders and rank-and-file members to his “Movement.”

What is not known, at this point in time, is whether the CIA, under Trump appointee Gina Haspel, is actively or passively assisting Bannon and key European far-right figures in establishing The Movement The CIA has a rich history of assisting Nazi officials in escaping from Europe after World War II. It also helped nurture neo-Nazi groups in Europe and Latin America as a bulwark against Communism. CIA archives are replete with reports detailing the connections between the CIA and neo-Nazi groups.

WMR has prepared a 51-page report on Bannon’s Movement, a country-by-country survey of the political parties that are being targeted for membership in the far-right alliance, and a brief history of neo-Nazi parties and groups in Europe and around the world. The report, titled, “The Rise of the Fourth Reich and Donald Trump,” is available to WMR members for a nominal e-store charge.

If you’re looking for an ethical and professional furnace repair contractor, go here.