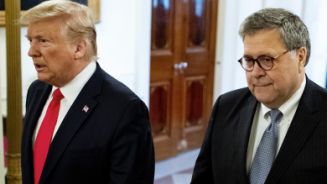 Attorney General William Barr — who this editor’s former colleague, the late New York Times columnist William Safire called “Captain Cover-up” in his first term as the nation’s chief law enforcement officer — is in the news regarding his criminal conspiracy involving Donald Trump, Rudolph Giuliani, and Ukraine. It is highly relevant that the activities of Barr’s father, Donald Barr, a former Office of Strategic Services (OSS) officer during World War II and the headmaster of the Dalton School, be closely examined. Understanding the senior Barr, who was influential in hiring the late convicted pedophile Jeffrey Epstein as a teacher, may explain the actions of his scion in one of the worst constitutional crises to hit the United States since Watergate. Don Barr’s 1973 attempt at writing a science fiction novel, “Space Relations: A Slightly Gothic Interplanetary Tale,” hardly vaulted him into the company of such sci-fi luminaries as Robert Heinlein, Isaac Asimov, Ray Bradbury, or Frank Herbert.

In fact, a reading of the book indicates that Barr used the occasion to vent, through fiction, some of his own weird sexual peccadillos. Aside from this, Barr also conveys an admiration for fascism, as seen in his dedication page’s inclusion of a stanza of the opera Tannhäuser, which was written by German composer and polemicist Richard Wagner. The 19th century German composer, with his celebration of Old Norse mythology in operas and poems, became a cultural icon for such German Nazis as Adolf Hitler, Joseph Goebbels, and Heinrich Himmler. Later, clearly, Wagner’s fans would include Donald Barr.

Barr’s dedication to Wagner in his gothic sci-fi novel includes the following verse: “for struggle and strife I will stand, though it be, too, for destruction and death: from your kingdom, therefore, I must fly – Oh queen, goddess, let me go! “ One can only wonder whether Barr’s fascination for Wagner arose during his OSS service. Other OSS officers, including Switzerland-based Allen Dulles, were known to admire and befriend Nazis, both in pre-war business dealings and, beginning even before WW II ended, in recruiting hundreds of them for post-war work assisting Allied agendas in Europe and globally. Among specifics were OSS efforts led by Dulles (future Central Intelligence Agency director from 1953 to 1961) to create a “rat line” for Nazis fleeing Germany into exile in the United States and South America in Operation Paperclip and other covert operations, as documented by David Talbot’s “The Devil’s Chessboard,” among many other books and declassified documents shocking in their implications.

Old Man Barr’s two other dedication page references include tips of the heat to voyeurism, human sacrifice, and human slavery. Barr also references a fictional group called the “Carlyle Society” that exiled political extremists to distant star systems. In 1987, the Carlyle Group, co-founded by former Deep State operator Frank Carlucci, was founded as a private investment group in New York. Now a multi-billion goliath running huge war and other government contracting companies like Booz Allen Hamilton as subsidiaries, the Carlyle Group was named after the Carlyle Hotel in Manhattan. Scottish philosopher/pundit Thomas Carlyle (1795-1881) held the notorious view fostering fascism “That great men should rule and that others should revere them.”

Barr’s sci-fi novel’s affectation for voyeurism and human sacrifice and slavery may provide some insight into his thinking when the Dalton School, over which he had been headmaster from 1964 to 1974, decided, in 1974, to hire Epstein — who did not possess a college degree — to teach and tutor youngsters in mathematics, physics, and calculus.

When one considers the type of plot and sub-plots in light of Epstein’s sex slave residences and compounds in New York, New Mexico, Paris, and Little St. James Island in the Virgin Islands, the Don Barr-Epstein relationship may have been the tip of some sex cultish iceberg. Old Man Barr’s actual history, prior to 1964 and Dalton, and after, should be subject to intense scrutiny considering the fact that the OSS and the successor CIA permitted and facilitated German Nazis to flee to Chile and Argentina, where they established sex-slave colonies like Colonia Dignidad in southern Chile. The connection of Donald Trump and other VIPs to Epstein’s activities should also be seen in the light of Old Man Barr’s sci-fi fantasies, as well as his OSS activities.

Barr’s book also features rape, prostitutes, eunuchs, the forced use of mind-altering “punishment drugs” on prisoners, erections and other sexual gratification resulting from being tortured and witnessing it, necrophilia, peep shows, bloody stools and sexual gratification from colonics (enemas), injection of female hormones into young boys, and a hulking prison guard with the name of “Pornack” and another character named “Osman Pederast.” Old Man Barr was, indeed, one “sick puppy.” How much of that perversion rubbed off on the twice-serving U.S. Attorney General, the guy who now thinks it’s perfectly okay to cage children around the United States?

Old Man Barr’s extreme right-wing Catholicism is exemplified in his calling a female slave torture facility the “Planned Parenthood Center,” an obvious slap at abortion. Barr wrote “Space Relations” in 1973, the same year that the U.S. Supreme Court legalized abortions in the Roe v. Wade decision. Old Man Barr, like Larry Kudlow, Robert Novak, famed obstetrician Bernard Nathanson, and drug store magnate and New York GOP gubernatorial candidate Lew Lehrman, had Jewish ancestry but became, in the familiar phrase, ”more Catholic than the Pope” after their conversions from Judaism. Most of these conversos gravitated toward the far-right Opus Dei sect of the church, which was no stranger to self-torture or flagellation in penance to committing sins.